Colon polyps are small benign tumors that grow on the inside walls of the large intestine, usually in or near the rectum. They range in size from a tiny grape to a small plum. Some, known as familial polyposis, are inherited, but the cause of most colon polyps is unknown. They become more common after age 40; most adults eventually develop them. The majority of colon polyps remain small and cause no symptoms. Some times, however, they grow large enough to interfere with normal bowel function, causing a change in the size and shape of the stools, possible constipation or diarrhea, bleeding (which mayor not be visible in the stool), and abdominal pain. A more serious concern is that some colon polyps contain cells that are or may become cancerous. This almost always happens in familial polyposis and is common if there are many or recurrent polyps. Thus, early detection and removal of colon polyps can help prevent colon cancer.

Other Causes of Rectal Bleeding

Even in the absence of symptoms, any one over age 40 should be screened annually with a digital rectal examination to check for growths in the lower rectum. Everyone over age SO should have sigmoidoscopy every three to five years. For this procedure, a hollow viewing tube is inserted into the rectum and lower sigmoid part of the bowel. If abnormalities are detected, or there is a history of familial polyposis, a more extensive diagnostic procedure called colonoscopy is done. The instrument used is similar to the sigmoido scope but has a much longer flexible tube that enables the physician to examine the entire colon. If any polyps or other suspicious areas are observed, a small tool can be inserted through the scope to take a biopsy sample. Diagnostic studies may also include a barium enema, in which a chalky substance is inserted into the colon to make it more visible on X-rays. A CT scan or MRI may be ordered if a suspicious growth is found. 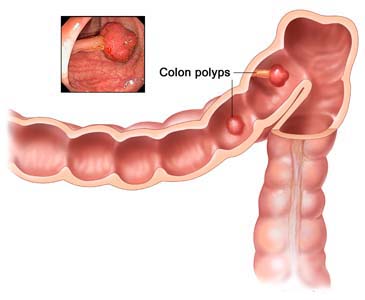 Small, benign polyps that are causing no problems do not necessarily require surgery, although most doctors will recommend their removal because they may harbor cancer cells. Small polyps can be taken out usually with the sigmoidoscope or colonoscope, a procedure called polypectomy. Larger polyps may be removed by laparotomy, which involves making a small incision in the abdomen and inserting a special surgical scope through which a section of the colon can be removed. When confronted with a case of familial polyposis, many doctors recommend a colectomy, or removal of the entire colon, because these polyps almost always develop into a particularly lethal form of colon cancer. This surgery is major and often requires the creation of a stoma, an opening in the abdomen to provide a new exit for fecal waste. However, a portion of the small intestine is sometimes used to take over normal bowel function .

There is no substitute for polyp removal, but alternative therapies may help to reduce their recurrences.

Many physicians and naturopaths believe that the development of colon polyps that may lead to colon cancer can be limited by a high-fiber, low fat, and low protein diet, which promotes healthy bowel function. Such a diet emphasizes fresh fruits and vegetables and whole grains instead of meat, and promotes rapid movement of food through the digestive system, thus reducing the growth of bacteria and chemical compounds that may enhance polyp or cancer growth. Of particular value may be oat and rice bran, as well as foods high in vitamins A and C. Some nutritionists also recommend supplements, particularly of beta carotene (precursor to vitamin A), calcium, and vitamins C and E.

Colon polyps cannot be self-treated, but you should pay attention to any changes in your bowel functions that might indicate a problem. In addition, the American Cancer Society (ACS) recommends that everyone over 40 have an annual stool test for hidden blood. This can be done at home, using a kit available at pharmacies or from some ACS chapters. A small sample of stool is smeared on a guaiacimpregnated card to detect enzymes found in hemoglobin, a major component of blood. Unfortunately, dietary factors, such as the recent consumption of red meat or iron supplements, often produce false test results, so be sure to follow instructions carefully. If the test is positive, a colonoscopy should be performed.