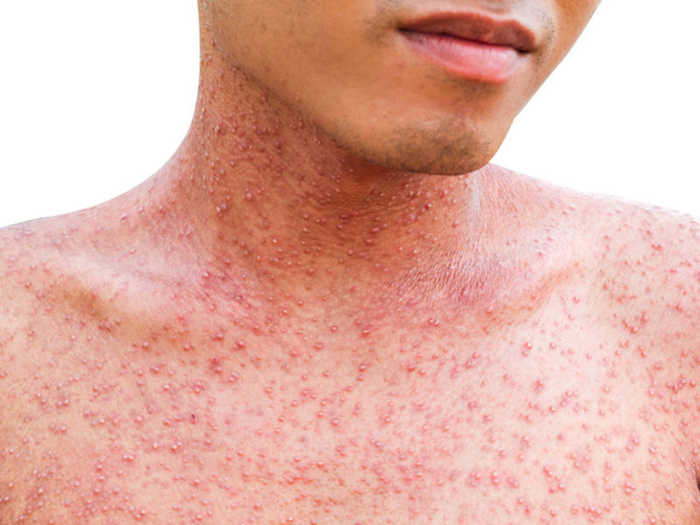 Measles is a highly contagious disease caused by a paramyxovirus. Medically known as rubeola, in the past it was referred to as nine day measles to distinguish it from the milder, three day German measles, or rubella. Measles was once exceedingly common during childhood, occurring often in local epidemics. Today, it is rare in most industrialized countries, thanks to wide spread immunization during infancy. From 10 to 14 days after exposure to the virus, flu like symptoms develop, including fever, runny nose, red watery eyes, and a dry cough. Some children also have diarrhea. The disease is at its most contagious during this phase. Within one to two days, tiny white dots appear on the lining of the mouth. A day or two later, the characteristic skin rash of measles appears. It starts behind and below the ears and, within another day or two, spreads to cover the entire head and body. The rash begins as tiny, slightly raised red spots that gradually increase in size and often join together to form large splotches. Any itching is usually mild. From three to five days after the appearance of the rash, all of the symptoms start to disappear. Although measles itself is generally mild, it carries a high risk of complications, such as pneumonia, ear infections, and encephalitis.

A doctor can usually diagnose measles simply by observing the characteristic rash and other symptoms. If there is any doubt, laboratory evaluation of the nasal discharge can sometimes identify the virus. Or blood tests can be done to look for antibodies to the virus.

When an unimmunized child or immunocompromised person has been exposed to the measles virus, an injection of measles immune globulin or immune serum globulin might be administered. These shots will bolster immunity, and thus may prevent the disease or reduce its severity. Antibiotics, although ineffective against the virus, may be prescribed to prevent or treat a secondary infection. Otherwise treatment is aimed at making the child more comfortable . You should watch for signs of complications and call a doctor immediately if any arise. These would include complaints of eye pain from bright light, unusual sleepiness or stupor, severe headache, and convulsions. At particular risk for complications are infants, persons who are taking steroids or immunosuppressive drugs, and children who have diabetes, asthma, or other chronic diseases.

One study showed that vitamin A supplements reduced complications and the death rate among malnourished third world children with measles. However, high doses of vitamin A are not generally recommended for children because of the danger of toxicity from them.

No one should ever have to suffer from measles, because a vaccination is available to prevent it. A child should be immunized shortly after his first birth day and again during the school years. The age for the second shot varies because some areas require the immunization before the child starts school . Children who do contract the disease should be kept at home to prevent spreading the infection and to allow for adequate rest to aid in recuperation. Although total bed rest is not necessary, only quiet activities should be allowed. Contrary to past advice, it is not necessary to keep a child in a dark room to protect his eyes. You may give a child acetaminophen to ease the fever, headache, and other discomforts, but not aspirin, which is associated with an increased risk of Reye’s syndrome, a severe brain and liver disorder . Be sure to offer the patient plenty of liquids, but do not force him to eat, especially when fever or diarrhea is present. If itching is a problem, applications of calamine lotion to rashy areas may ease it. Taking a bath in lukewarm water to which cornstarch or colloidal oatmeal has been added also alleviates itching.

Other Causes of Rashes And Fever

Symptoms similar to those of measles may be caused by other viral infections that produce a splotchy rash, such as chickenpox, rubella, and scarlet fever.